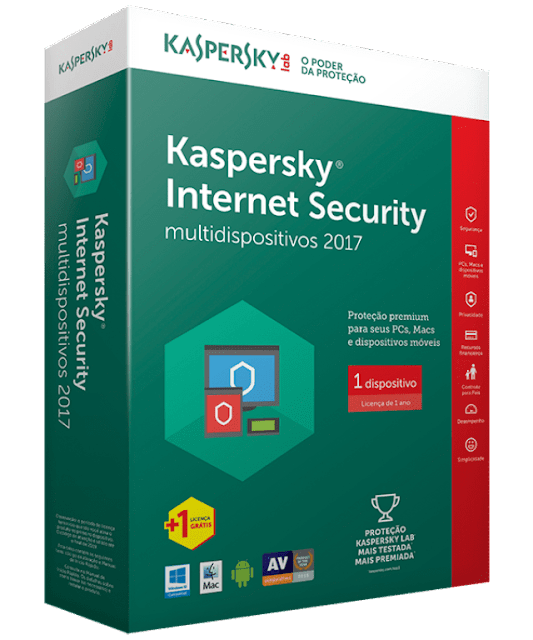 Kaspersky Internet Security 2017 is a connectivity-focused antivirus aimed at home users who need protection for multiple devices. For the new version, the antivirus has gained reinforcement of new protection features, such as Secure Connection, Software Cleaner and Software Updater.

In addition, highlights from older editions of Kaspersky, such as high performance in detecting threats and Safe Money, which acts in real time protection in online purchases and financial transactions.

The 2017 edition of the security application has the addition of some relevant features. Safe Connection monitors the status of the network currently in use by the device, analyzing whether the network environment poses no risk to the user.

In case of danger, the protection acts to prevent attackers and infected files from causing problems.

Software Updater, as the name implies, monitors the applications available on the Android computer or device. The tool finds updates and automatically applies them to prevent bugs and various vulnerabilities.

Finally, Software Cleaner analyzes your computer or mobile device to detect little-used applications that may pose security risks. If it detects a problem, the tool warns the user so that he or she is aware of the problem and can remove the app considered dangerous.

Kaspersky's products enjoy a reputation for great performance in detecting threats and in overall protection of the devices on which they are installed. In the case of Kaspersky Internet Security, the reputation is justified: very complete, the antivirus offers a level of protection and advanced security features very interesting for those who need protection and privacy on multiple devices, since it is possible to buy the same license for use on Android, macOS and Windows.

For those considering investing in the purchase of an antivirus, however, the big question is the software's overall performance in protecting against threats and detecting them before they even have a chance to cause harm. And in this department Kaspersky Internet Security proves to be extremely efficient: AV-Test, Simon Edwars Labs, and MRG-Effitas reviews give Kaspersky extremely high marks.

The argument in favor of buying the one-year license is also strengthened by the advanced features: Software Updater and Cleaner and the Secure Connection monitor complement Safe Money, designed to protect financial transactions, and make Kaspersky a very complete security suite - something that, it's important to note, has become a must-have in today's market, as rivals have followed suit in recent years.

Kaspersky Internet Security proves to be one of the best antivirus programs available today for anyone looking to invest. The one-year license for one device (be it Windows or macOS) costs $39.90, which is not cheap, especially considering the free options and even some packages from other developers that can be purchased at lower prices, or with licenses for several devices.

With a clean graphical interface, clear and objective information about what each feature does, and good performance, Kaspersky Internet Security is one of the best antivirus programs for Windows today and offers high protection for any user profile. If the price of the one year license doesn't scare you, there are no reservations that can be made about the application that has an excellent track record of threat detection performance in independent tests, good overall performance and interesting feature set for any usage profile.