Malwarebytes Anti-Malware is a classic and respected program that acts as an antivirus and advanced digital pest remover.

If you are someone who cares about the integrity of your computer and the personal files stored on it, this program is a great ally to protect yourself from the threats we are susceptible to in the virtual world.

The software has won thousands of fans around the world because of its ease of use and unique algorithm for more accurate malware detection.

Recently, the program has been completely revamped with a renewed and even more uncomplicated interface and new functions for those who want to keep their personal documents as safe as possible. 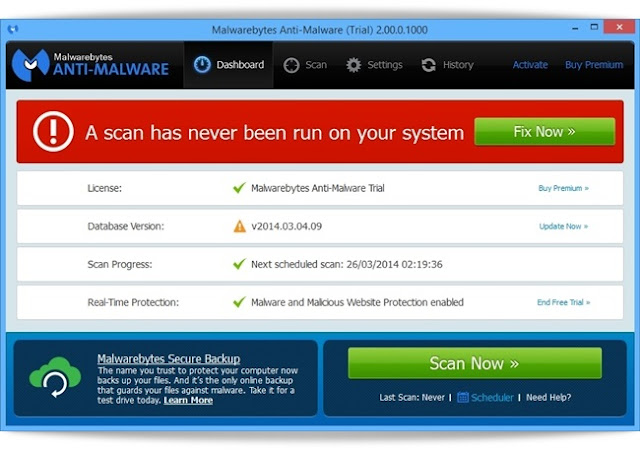 One of the key differentiators of the new Malwarebytes Anti-Malware is its home screen, which displays real-time information about the health status of your computer. This panel also shows data about your license, database update, progress of any scans, and real-time protection status.

Also in this main section of the application you can run a new operating system scan ("Scan Now") and set up periodic automatic cleanups ("Scheduler"). The program enables you to follow the complete OS scan process, knowing exactly which section of the OS is being scanned, the elapsed time, how many objects were scanned, and the number of threats identified. 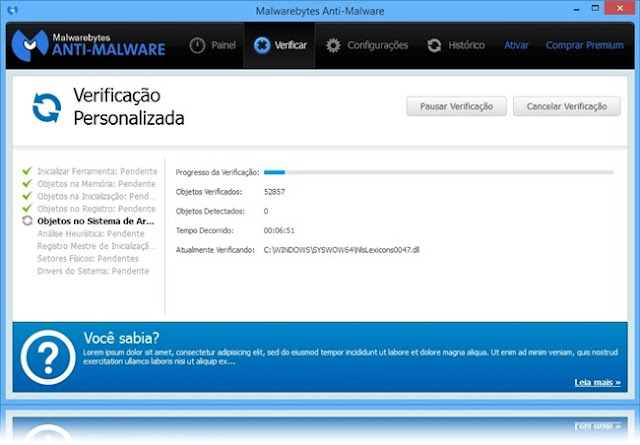 At the end of the process, a report is presented for you to decide what it should do with the potential malware: quarantine, delete, or ignore. Interestingly, the latest version of Malwarebytes Anti-Malware already has the Anti-Rootkit feature built into its protection algorithm. Thus, it does away with the need to have software specifically geared to protecting against rootkits.

Tailored to your needs

Malwarebytes Anti-Malware also has a number of configuration options so that you can customize the software and adapt it to your specific usage profile. You can, for example, create a list with malware and web pages that should not be blocked even if abnormal activity or malicious scripting is detected. 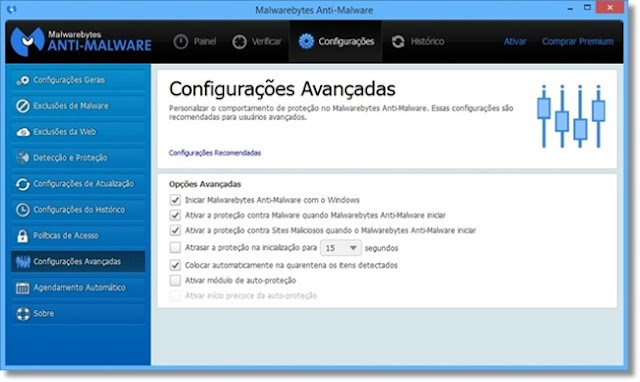 We should point out that this is a resource that should be used with caution, since a theoretically reliable site can end up transmitting various viruses to your computer without you realizing it. Therefore, add items to this list only if you know exactly where the content comes from and are sure that it is reliable.

Also in the settings section, you will find options to change the language (including Portuguese), define whether or not the program should be loaded with Windows, determine the depth level of scans and which types of malware should be hunted, some restrictions on notifications, among other features.

Limitations of the free version

Finally, we should make it clear that this free edition of Malwarebytes Anti-Malware has some limitations. The main one is that the real-time protection module, which monitors your computer while you are using it, remains disabled. This turns the application into a "secondary scanner" that should be used in conjunction with your traditional antivirus. 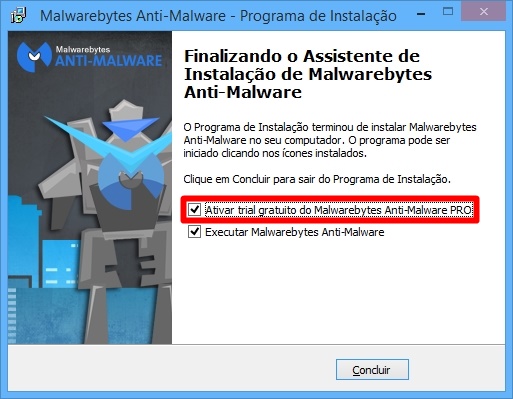 As soon as you have finished installing the software, you are offered a trial period of the full license, i.e. with all features released. This trial period expires after 30 days.

It is also worth noting that, unlike its previous version, the enterprise edition of the new Malwarebytes Anti-Malware will not be sold through lifetime licenses, but rather through annual subscriptions that can be cancelled by the customer at any time. The only exception is for those who have previously purchased a lifetime license, and these people will continue to have full access to the enterprise edition.

Our Review of Malwarebytes Anti-Malware

As good as its first version, the new Malwarebytes Anti-Malware shows that the developer has everything to establish itself as one of the best information security companies in the not-so-distant future.

For beginners and experts alike

The new application draws attention, above all, because of its much more modern and undeniably attractive interface (appealing, of course, to the minimalism trend). The program does away with overdone menus and concentrates its main functions on large, eye-catching buttons. In short, we can say that Malwarebytes Anti-Malware is not only aimed at advanced users or information security experts.

As if that were not enough, it has gained a complete translation into Portuguese, making it easier for those who do not master English to understand and much easier to use. This way, anyone interested in keeping their PC always free of viruses can enjoy this utility without any problem, since it is much simpler and more "accessible" than its predecessors.

The virus detection remains excellent, especially with the addition of the rootkit-finding algorithm, making Malwarebytes Anti-Malware a more complete software that does not require an additional protection mechanism. In addition, the scans have proven to be very thorough, including scanning for data stored inside files.

The scanning process is fast and has proven to be efficient. However, this combination of features comes at a price: the relatively high consumption of computer resources. During our analysis, the application took up almost 200 MB of RAM memory and required 20% more processor power.

These figures are not exorbitant, but machines with more modest hardware configurations may suffer a little to meet this demand, and may be slow. For these cases, the best thing to do is to run it alone, without any other tasks in progress, in order to avoid crashes.

While we can't say that this is a negative point - after all, developers have the right to charge for their hard-working products - the free version of Malwarebytes Anti-Malware is somewhat limited. Basically it only offers manual scanning capabilities without the possibility of scheduling.

However, this does not detract from its qualities and the fact that it is a top-notch program that will be worth installing even for a trial run. And if you are willing to spend a bit on your machine's security, it is worth looking into the possibility of saving a few coins to purchase the professional edition and have all the application's features properly unlocked.