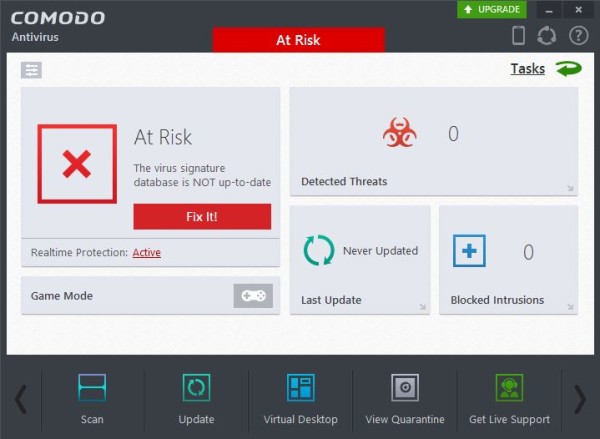 Comodo Antivirus is a virtual security solution for Windows that has several options and tools to protect your computer. In addition to the traditional hard disk scans for malicious files, Comodo Antivirus also has a virtual desktop in which you can run unknown programs without them affecting your system's security in any way.

There is also a file sharing space created by Comodo Antivirus that allows you to access documents both on the virtual desktop and on the Windows desktop itself. This is ideal for those who test a lot of different software frequently and prevents a lot of debris from accumulating on their PC.

Comodo Antivirus has two ways of organizing the interface: the default (Start), which shows some important information about the program and leaves the tools organized in a list of icons at the bottom of the window; and the traditional one (Tarefas), which leaves the functions organized in grids divided into three sections. Check out the main details of the program.

You can perform four different types of scans on your computer with Comodo Antivirus. Touching the “Scan” button gives you the following options: “Quick Scan”, which scans the most critical places on your hard drive for potential threats; "Full Verification" which checks absolutely all computer directories; "Reputation Verification", which compares the data of unknown files present on your computer with a database of the developer's reputations; and “Custom Scan”, which allows the user to create their own guidelines for scanning the PC, including targeted searches for specific folders or removable storage devices.

All of these checks take different times to complete and this depends a lot on your computer's settings. If you have a very spacious hard drive, it is natural that these procedures take longer. The average, however, is 10 minutes for the quick check. 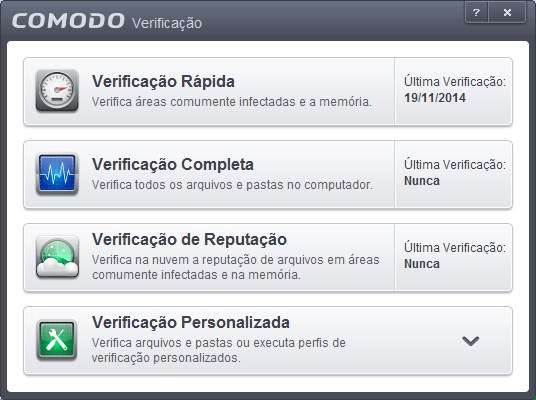 This function of Comodo Antivirus allows the user to try out software on the computer without actually installing it on Windows. You create a virtual environment within the system and anything run in that area will have no effect on your computer. So, if you're testing some music editing programs, for example, but you don't know the developers, you can protect yourself by running these apps alone. With this feature, you can also avoid adding third-party software and toolbars to browsers.

To access this function, you must click on “Virtual Desktop” and install Microsoft Silverlight if you do not already have this add-on. To have more virtualization options, go to "Tasks", in the upper right corner of the screen, choose "SandBox Tasks" and see all the possibilities of this tool. 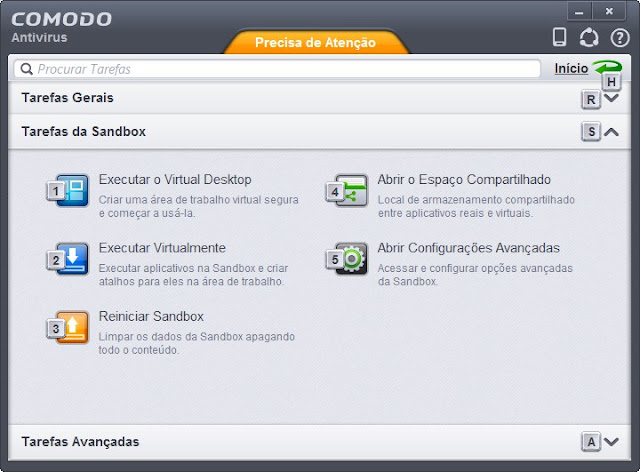 Among the advanced tasks, the program has the possibility of creating recovery discs for Windows (CD or USB stick), cleaning the system Endpoint, sending suspicious files to Comodo for analysis and returning with a complete report, using the Task Manager system and so on.

Even in the free version of Comodo Antivirus, you have the possibility to be assisted by Comodo technicians to answer questions about the application and check out some security tips. It is important to note that this function is staffed in English only. Therefore, you need to know this language to receive support.

During installation of Comodo Antivirus, the app offers changes to your browsers' home screen. It's not about crapware or anything like that, but you need to be aware of this if you don't like having problems with this type of change on your PC.

The program starts working immediately after installation, but a reboot is required within 4 hours of installation for the app to work properly.

Our Opinion about Comodo Antivirus

Comodo Antivirus is a complete security solution for your computer. The app has everything you could expect from an antivirus and even has some tools that are hard to find in its competitors. There's even online support via chat with the developer's technicians, in case you need to ask questions about the software.

Comodo Antivirus's interface is not the prettiest among the antivirus on the market, but it is very organized and manages to be simple enough for any user. There are specific buttons for performing scans, updating software, opening the virtual desktop and so on.

The verification options are very straightforward and, in our tests, were performed without delay. Of course this varies from PC to PC, but we were still pleased with the efficiency of this feature. The program also doesn't bother the user with false positives and, in case you have doubts about a suspicious file, you can send it to the developer for a deeper analysis.

Comodo Antivirus's great differential is undoubtedly its virtualization area. There are several options for carrying out this type of activity and the benefits of having this integrated with an antivirus are obvious. You protect yourself against unknown software and can use them without any worry about installing third-party applications during setup. Other than that, there are several tools integrated into Comodo Antivirus's Virtual Desktop.

In our tests, the antivirus didn't show any performance issues. It managed to keep our PC safe and also brought in a lot of useful functions. The problem is that it is not possible to schedule periodic checks in the free version of the software. For less aware users, this is essential. On the other hand, it has real-time protection, which reduces the need to perform many full or quick scans.

Therefore, we can say that it is very worthwhile to use Comodo Antivirus as the main protection for your PC. More advanced users will especially like the software for its efficiency and extra features.