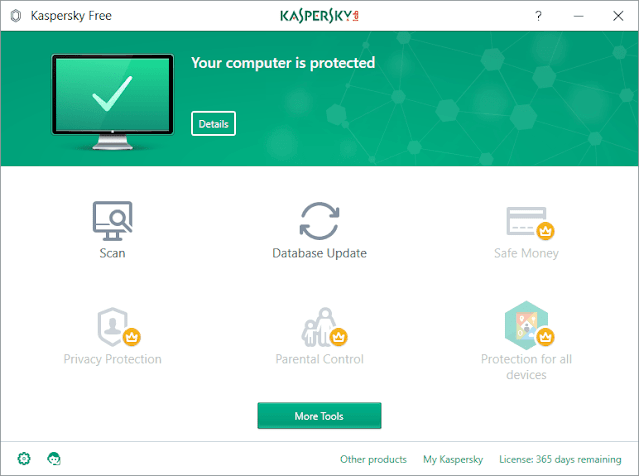 Kaspersky Free is the first free version of Kaspersky Lab's antivirus. Simpler than the paid versions of the Russian developer, the antivirus has basic protection features that draw attention because they offer detection, removal and protection mechanisms developed by the company.

The free version of Kaspersky offers protection against files, emails, the Internet, as well as support for updates and maintenance of files in quarantine, with a set of very simple features, similar to what the common Windows 10 user already has access to when using Windows Defender. The difference, however, is that Kaspersky's product relies on specific technology from Russian developers for identifying and solving security problems.

This technology is the calling card of antivirus which is quite simple. Rated by AV-Test's independent tests as one of the best on the market, Kaspersky's analysis tools can make antivirus a good choice for anyone who wants better protection, can't pay for a subscription, or prefer to install lighter antivirus.

This is another positive point of the product: Kaspersky Free is also lighter and ideal for those who use machines with limited processors or low RAM memory.

In terms of graphical interface, Kaspersky Free follows the language used by other branded products and presents, on the initial screen, all the features that are forbidden to the user of the free model as an invitation to consider investing in a subscription.

The arrival of Kaspersky Free is good news for bringing a quality product to the competitive free antivirus market. Lightweight, simple to use and feature-level enough for home users, the option is a great choice for those who don't trust Windows Defender, or simply want to retire some expensive and heavy antivirus.